skip to main | skip to sidebar

See the calendar on the right for the full schedule.

COPS in the News

February has been a big month for public engagement by members of COPS. First, Olga Kamenchuk co-authored a piece in the Washington Post reporting on survey data on American attitudes toward Vladimir Putin:


Posted by William "Chip" Eveland at 9:48 AM No comments:

Tuesday (Feb. 25) Erin Drouin will be talking about her research and seeking our feedback. Please come, but do note we'll be meeting one hour later than normal for this meeting.

An an important stereotype that people may use when evaluating political candidates is gender-based issue competency. Voters may evaluate males as more competent at economic and military issues, while women are evaluated as more competent at 'compassion issues' such as education and healthcare. However, current work has found mixed results with some studies finding that voters use issue-competency stereotypes while other studies find no such relationship. We suggest that people's level of political knowledge is an important moderator that may explain the discrepancy in findings. Furthermore, we use non-self report measures of stereotyping -- verbal descriptions of candidates and eye movements  -- to circumvent social desirability biases which could underestimate the use of gender-based stereotyping.

Posted by William "Chip" Eveland at 1:23 PM No comments:

Next week Dr. Lindsay Hoffman will speak to the COPS group about her career trajectory as a political communication scholar. Dr. Hoffman is Associate Professor of Communication and Associate Director of the Center for Political Communication (CPC) at the University of Delaware. She earned her Ph.D. in Communication from The Ohio State University in 2007 after completing her M.A., both under the advisement of Dr. Chip Eveland. Dr. Hoffman was one of the founding student members of COPS and presented regularly in preparation for conferences and job talks. One paper that worked its way through COPS is now one of her most highly cited papers (Hoffman & Thomson, 2009). Broadly, Dr. Hoffman's research examines how various forms of media and technology foster or suppress political behavior and communication. She is also Director of the CPC's National Agenda Series, where she talks with politicians like Joe Biden (a UD alum) and John Kasich, journalists like NPR's Domenico Montanaro (a UD alum), comedians like Chris Garcia and Ashley Nicole Black ("Full Frontal with Samantha Bee"), political cartoonists, and interesting public figures across the ideological spectrum.
Posted by William "Chip" Eveland at 10:32 PM No comments:

Jason Cornel's Research in the News

https://www.dispatch.com/news/20191225/facts-are-misremembered-to-fit-personal-biases-ohio-state-study-finds
Posted by William "Chip" Eveland at 9:40 PM No comments: 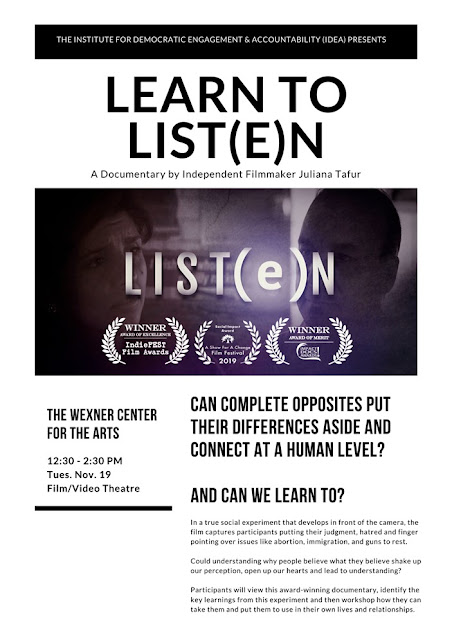 Posted by William "Chip" Eveland at 9:35 AM No comments:

Dave Whitsett Next Week in COPS

Next week Political Science Ph.D. student Dave Whitsett will present in COPS, and he's looking for potential collaborators. Here's a description of the ideas he'll present:

Political science and communication scholars in recent decades have been preoccupied with an array of issues related to what might be called the “epistemic well-being of democracy.” Worries about democracy’s epistemic well-being motivate research warning, for example, of the increased potential for cognitive biases to influence people’s worldviews in a high-choice informational environment, the possibility that citizens might intentionally or unintentionally use technology to sequester themselves into “echo chambers” that do not expose them to challenges to their beliefs, and the ability for misinformation to spread through new communications media with unprecedented ease and quickness due to reduced barriers to entry. Of late, the picture painted by commentators has tended to be highly pessimistic, with numerous scholars and mainstream pundits voicing sentiments similar to those expressed by Anya Schiffrin, who in a recent issue of the Journal of International Affairs claims that “it does not seem an exaggeration to say that disinformation spread by social media has undermined the functioning of democracy globally.” (1)

While I agree with these scholars that the epistemic well-being of democracy is of paramount normative importance and that it is vital to try to understand the ways it is impacted by evolving communications technologies, I also believe sweeping conclusions like Schiffrin’s are premature. This is mainly because the empirical research agenda pursued by scholars looking into the various topics cited above has so far tended to overlook several key issues that need to be addressed before we can make any strong conclusions about whether new communications technologies are undermining democracy and which policy proposals are best suited to help us do better. In my presentation, I’ll highlight the four issues I take to be most important and sketch a couple rough ideas for empirical research I think might go some way to shoring them up. As a theorist by training, I’d love to find a collaborator or two with a stronger background in empirical research/methodology if anyone is interested. Thanks in advance for all of your time!

(1)    Schiffrin, Anya (2017). “Disinformation and Democracy: The Internet Transformed Protest but did not Improve Democracy.” Journal of International Affairs 71:1, 117-125.

Posted by William "Chip" Eveland at 5:04 PM No comments:

This week at COPS we had practice presentations for papers by COPS Ph.D. students Olivia Bullock (and collaborators) and Matt Sweitzer. Both Olivia and Matt will be presenting next week at the National Communication Association (NCA) conference in Baltimore, MD. Great turnout -- marred only by my lame photo editing skills to create this panorama. Next week we'll have presentations by students who are new to COPS this year; see you then!

Posted by William "Chip" Eveland at 3:15 PM No comments:

This paper demonstrates that people are not as accurate in perceiving the political viewpoints of their political discussants as prior research has suggested. The political context appears to play some role; evenly divided contexts make guessing harder and so decrease accuracy. The paper also makes the case for paying attention not just to the accuracy vs. inaccuracy dichotomy, but to the threshold for trying to guess or accepting uncertainty -- that one just doesn’t know. And communication plays a role in both of these processes. 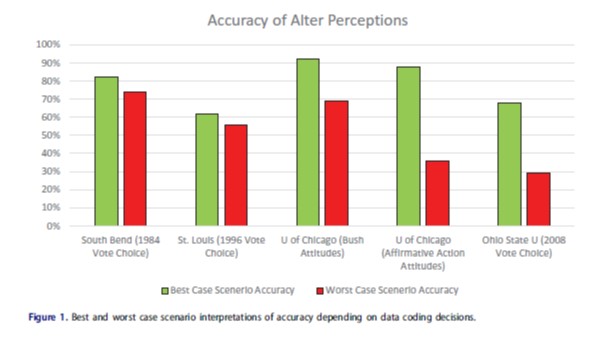 Posted by William "Chip" Eveland at 12:57 PM No comments:

New Facebook study by Garrett and Poulsen in JCMC

In their new paper "Flagging Facebook falsehoods: Self-identified humor warnings outperform fact checker and peer warnings" in the Journal of Computer-Mediated Communication, Kelly and Shannon present two studies evaluating the effectiveness of flagging inaccurate political posts on social media. In Study 1, they tested fact-checker flags, peer-generated flags, and a flag indicating that the publisher self-identified as a source of humor. Conducting a 2-wave online experiment (N=218), they found that self-identified humor flags were most effective, reducing beliefs and sharing intentions, especially among those predisposed to believe the post. They found no evidence that warnings from fact checkers or peers were beneficial. Compared to the alternatives, participants exposed to self-identified humor flags exhibited less reactance to and had more positive appraisals of the flagging system. The second study replicated the findings of the first and provides a preliminary test of what makes this flag work.
Posted by William "Chip" Eveland at 11:39 AM No comments:

Today we will talk about an issue that is particularly salient at this moment in the United States: the role of context in the study of political communication effects. A new Forum was just released in the journal Political Communication which focuses on just this topic. For instance, Rojas and Valenzuela make the argument that research in the United States should have the same expectation of taking explicit consideration of the context of research conducted here as scholars studying other political contexts must make regarding any particular idiosyncrasies of those contexts. Let's talk about this, but perhaps expand the idea to the particular temporal context or geographic context of the research that we conduct in the U.S. For instance, what are the implications of gathering data at the current political moment, as the U.S. House of Representatives pursues an impeachment inquiry against the president, and roughly 20 Democrats vie for their party's nomination to run for president in 2020? And, would it matter if one were conducting a study a politics at this time in Iowa compared to Columbus Ohio compared to Montana?
Posted by William "Chip" Eveland at 9:46 AM No comments:

For those out of the loop at the end of Spring 2019 (as I was due to being on sabbatical...), I wanted to share this news:
Last spring at the School of Communication’s annual "Comm Day" celebration and awards banquet, two COPS members won awards for their outstanding research. Matthew Sweitzer won the Doris Gildea Morgan award for top senior researcher, and Olivia Bullock won the Walter B. Emery award for top junior researcher in the School. Belated congrats to them both!

Posted by William "Chip" Eveland at 10:58 AM No comments:

Kelly, Rob and Shannon had an interesting piece in The Conversation back in August on belief in satirical news. It contributes to a larger debate: should Snopes fact check satirical website The Babylon Bee? With data from a 6-month panel, they found that a number of people believe satirical articles are truthful. They argue that making the satirical intentions of the source more clear would help minimize unintended belief in inaccurate information.
Posted by William "Chip" Eveland at 1:48 PM No comments:

Hillary and her colleague, Associate Professor Daniel Bergan (Michigan State University), won a $20,500 grant from the North Central Regional Center For Urban Development for their project titled "Local policymakers' perceptions of the opioid crisis and the efficacy of extension communications.”

As noted on the OSU School of Communication website, their project “aims to identify message strategies that affect how policymakers engage with the opioid crisis in their communities.”

Keep up the awesome work Hillary!
Posted by Shannon Poulsen at 2:32 PM No comments:

My apologies for missing again this week, but I hope to be back next week…

Posted by William "Chip" Eveland at 12:07 PM No comments: